We recently had the great pleasure of working with the CMA on the forthcoming SPIN ART exhibition, which runs Feb 26 - Aug 21, 2016.

Here's a bit from the Dispatch article:


Long before digitized music, when album-cover artwork wasn't scaled down to fit the tiny screen of a handheld gadget, the tactile and visual elements of a vinyl record held a distinct appeal.

The covers had a certain sight, feel, even smell.

An exhibit at the Columbus Museum of Art will revisit this corner of the past at a time when the vintage audio format is again enjoying heavy rotation among old- and new-school listeners alike.

Set to open Friday, "Spin Art" will showcase album covers of varied styles and significance via the musical works of artists from Bob Dylan and Funkadelic to Sonic Youth.

Sizing up the oft-intricate details of a 12 1/4-inch-square jacket takes a lot more work than does assessing the shiny case of the much-smaller compact disc.

"The music and the artwork can almost seem intertwined," said Paul Langhirt, a 51-year-old record collector from Worthington who offered 22 titles from his collection of 6,000-plus albums for the show. 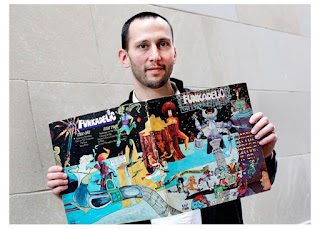 Still, with the "Spin Art" rotation encompassing only 90 records, "it's just barely scratching the surface of what's out there," said Jeff Sims, a creative producer for the museum.
"We were looking for album covers that went on to really define the visual identity of the artist or the music that’s on the record."

That sentiment could apply to countless albums through the decades whose facades are nearly inseparable from the melodic content within, including Velvet Underground's 1966 debut featuring the peel-able Andy Warhol banana print or David Bowie's "Aladdin Sane" (1973), which shows the glam-rock performer in his iconic lightning-bolt makeup.

Sims worked with Brett Ruland, co-owner of the Downtown shop Spoonful Records, to round up a predetermined list of records for the display. It is staged in the museum's recently renamed Open Gallery, a space highlighting pop culture and graphic design.
Like any good record collection, the pieces in the exhibit aren't all pristine: Many of the beloved albums have been listened to countless times — which is part of the point.
"These are things you might have in your house," Sims said. "I was very happy to see ones where someone had written their name on them."

Accompanying each piece will be a placard bearing information about the musicians as well as the artists who helped conceive the cover designs.

Among them: the English design group Hipgnosis, which specialized in progressive album covers for rock bands such as Pink Floyd ("A Saucerful of Secrets," "Dark Side of the Moon," "Wish You Were Here" and "Animals" all are featured).

Also in the show are other conceptual Warhol covers: "Sticky Fingers" by the Rolling Stones and Aretha Franklin's "Aretha," a colorful 1986 release that was one of Warhol's last works before his death a year later.

There is a focus, too, on the continued connection between hip-hop and comic-book artists, as underscored by releases ranging from Wu-Tang Clan to Run the Jewels.

Such aesthetics had drawn in curious listeners long before the record's legacy found its place in popular culture.

"They always say you shouldn't judge a book by its cover, but a lot of people do," said Ruland, 43, a former Columbus Museum of Art employee who, with his wife, Amy Kesting, handled much of the gathering of album covers. "It's a very good selling point." 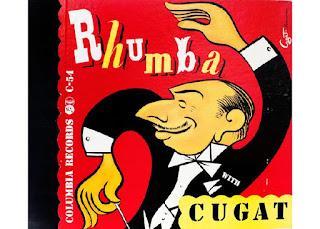 That notion, in fact, is what inspired the concept of album art in the first place.  Vinyl records featured no exterior decor until 1938, when graphic designer Alex Steinweiss began crafting visual identities for releases on Columbia Records (several are included in the exhibit). The works of Steinweiss, Ruland said, were "very funky, suggestive of jazz and the rhythms ... very mod, very weird and very personal."

Last year, Ruland said, was Spoonful Records' busiest since the store opened six years ago.
The upswing matches a national spike in vinyl sales: Nine million records were sold in the first half of 2015 (a full tally for the year is expected in mid-March), according to the Recording Industry Association of America. By comparison, 14 million were sold in all of 2014.


kjoy@dispatch.com
Posted by Spoonful Records at 9:35 AM