We are open Mondays in December. We open early on Christmas Eve for you last minute shoppers, and we will take a break January 1st - 3rd. We close one hour early on NYE.


We have lots of great gifts in store for every vinyl listener, from new Audio-Technica turntables to new releases, quality reissues, and clean used records. We order new records 4 times a week, so if you have any special titles you want us to order, just ask or send us a FB message. 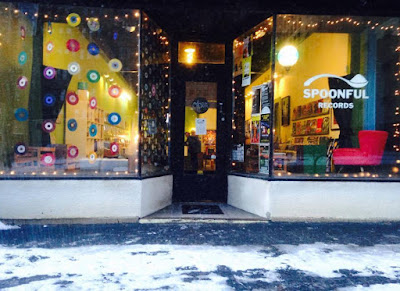 For Black Friday weekend, Novemeber 24-26th, like every year, we will have LOTS of RSD exclusive releases available (these are ONLY available at independent record stores!).

You can check out the official list of all the cool titles for Black Friday here: http://www.recordstoreday.com/SpecialReleases

Or peek at the Press Release:
http://recordstoreday.com/Page/984

We have Audio-Techina turntables IN STOCK and ready to plug in and start spinning, or give as an awesome gift! All in-stock turntables will be $10 off.

Plus we will have all the great new vinyl releases stocked up!

Doors open at 8 am on Black Friday and there is plenty of street parking all around downtown at that time of day. We have five free spots, #1-5, where it says Duckpin & Pinball on the back of Pins.

Check our Facebook page for all the details!
Posted by Brett at 9:06 AM No comments:

In a state full of cool, little record stores like Shake It & Everybody's in Cinci, Colemine in Loveland, Omega in Dayton, Square in Akron, Finders in Bowling Green, Lucky's in Wooster, My Mind's Eye & Music Saves in Cleveland, and many more here in Columbus, it is truly an honor to get this shout out from the subscription service, Vinyl Me, Please. Thank you to Ian Benson, for capturing our store's spirit.

The 50 Best Record Stores In America is an essay series where we attempt to find the best record store in every state. These aren’t necessarily the record stores with the best prices or the deepest selection; you can use Yelp for that. Each record store featured has a story that goes beyond what’s on its shelves; these stores have history, foster a sense of community and mean something to the people who frequent them.


It was a sunny and hot Saturday in May when Jessica and Zak Moses got married at Spoonful Records in Downtown Columbus, Ohio.

“How we met is musically related,” Jessica said. “[A friend] joined the band he was in. I knew him as an acquaintance and he moved back to Columbus and we got to know each other then.”

Nearly four years later, the two were engaged and planning out their wedding. They knew they didn’t want to have it at a church, despite knowing that would please their family, and instead they looked for that perfect balance of both meaning and convenience. 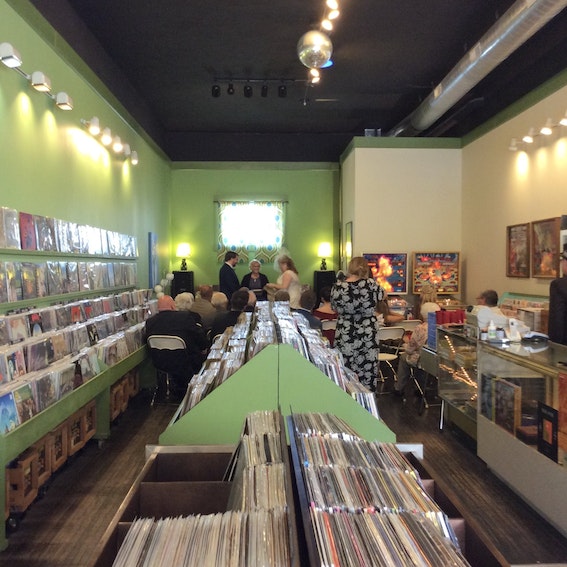 “It was kinda on a lark,” Zak said. “We hadn’t really been searching for venues for that long when [Jessica] suggested, ‘Hey, how about Spoonful?’” Despite living near closer record stores, both Zak and Jessica were Spoonful regulars; Jessica even knew owner Brett Ruland before he decided to open the store. By the time they reached out to Brett and his wife and co-owner Amy Kesting, they were firmly resolved on getting married in the store. Brett and Amy were surprised, delighted and accommodating. When they had gotten married a few years before, they considered holding the ceremony in the store themselves before deciding they spent enough time in there. 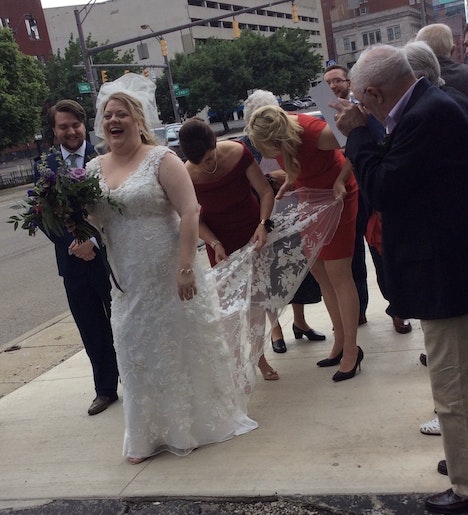 On the day of, Zak wandered over with some of Jessica’s family to get the store ready, which of course included the music—it was apparently the first time the store’s audio setup handled an iPad. (All of the music they chose to play they owned on vinyl, but both Zak and Jessica felt carrying a stack of records on their wedding day was an unnecessary complication.) Amy made sure to wear a dress, Brett upgraded his usual work shirt with a blazer but kept his porkpie hat. They shut down the store down at 3:30, and any stragglers were politely asked to leave. As Jessica stood outside in her dress, people were still wandering up to the shop, unaware of what was about to happen. 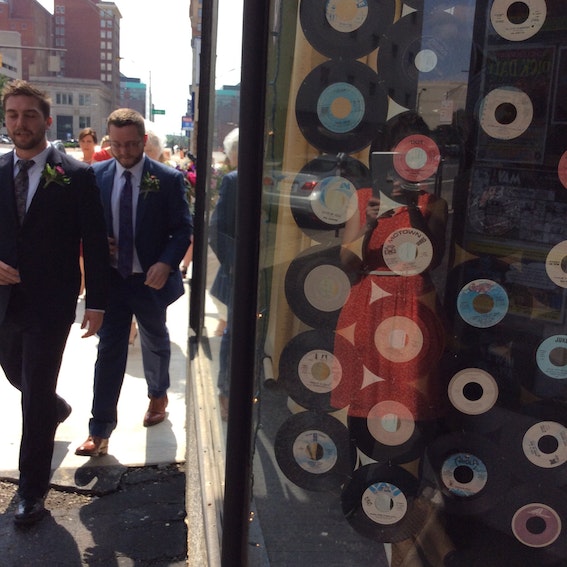 The wedding was private, small and intimate, mirroring its setting. The ceremony took place in the back of the store, the stands cleared out to fit everyone, but it was still unmistakably Spoonful. The painting of Otis Redding still hung on the wall and a copy of Solange’s A Seat At The Table was on a shelf near where Zak stood, sneaking into some of the photos. Only a few family members attended, with a small group lingering outside, unable to fit in the confined space but dead set on seeing the wedding somehow. At the end, Zak and Jessica walked over to Brett and Amy, thanking them for all they had done to turn this lark into reality, and then asked them one for final favor, to serve as the witnesses.

An hour later, Spoonful Records was open and back to being just the best record store in Ohio, like nothing ever happened.

I first found Spoonful shortly after moving to Columbus. It was summer, and I was living all alone for the first time. My apartment was too large and too empty and spending afternoon after afternoon surrounded by its silence was off-putting, so I explored the city. I knew the area around Ohio State’s campus and the main drag through my neighborhood, but everywhere else was unknown. I didn’t set out to find a record store when I stumbled upon it, I just wanted to get a better sense of my new home. I paused at the door, trying to figure out whether it was push or pull and which of the two handles to grab when Brett mercifully opened it for me. I smiled to him before taking in the store’s faded lime green walls and black and white checkerboard floor that eventually gives way to hardwood. I noticed the pair of pinball machines in the corner—they were the only part of the store that wasn’t dedicated to music so they at first seemed out of place, but the more I looked at them, the more I couldn’t picture the store without them. I don’t know what record stores used to look like, when vinyl was the only game in town, but I imagined it was something like Spoonful. It looked like the platonic ideal of a record store, simultaneously both old and new, and I was certain it had looked like that since it first opened. I thumbed through the new releases, eventually buying a copy of Taylor Swift’s Red because I desperately wanted it to be fall. As I left, my heart was buoyed by finding a store like this downtown. 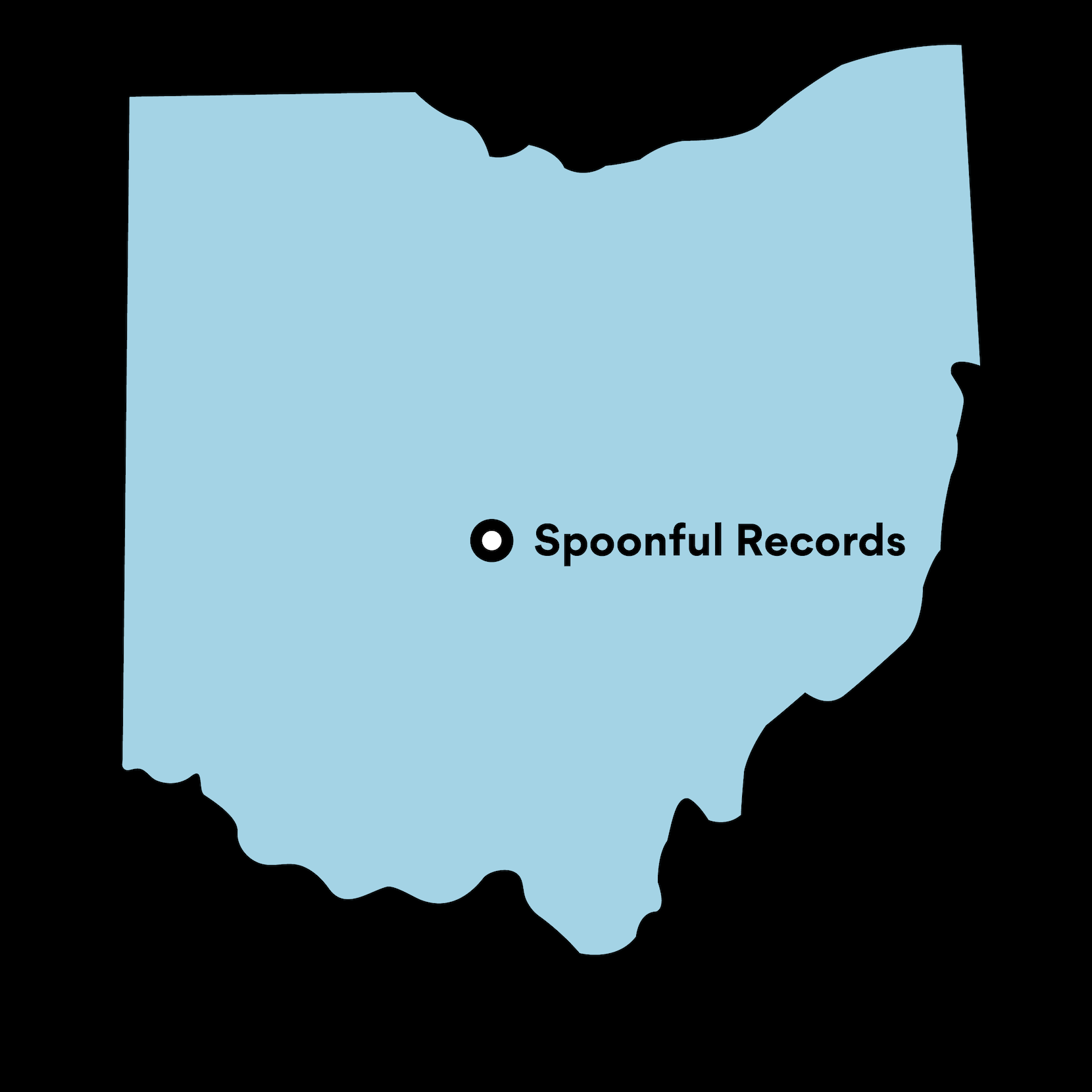 There’s a perception of Columbus as a small town that doesn’t fit with its reality anymore, but shedding past labels is nigh-impossible. In truth, it is the largest city in Ohio, and the second largest in the Midwest behind only Chicago. It was founded as a compromise in 1812 so the capital would have a permanent home as opposed to being yanked around by some of Ohio’s early, prominent politicians. At the time of its establishment, the land was a thick forest that was used for hunting, but now the city is a beast of square footage that swallowed its suburbs and surrounded those that refused to incorporate it. Still, its called Cowtown and mostly known for being the capital and home to Ohio State. Ohio’s cultural cache is torn between Cleveland and Cincinnati, Columbus getting the scraps—there’s a reason the city’s pro teams are in the less popular leagues (sorry, Blue Jackets). But the area has been on the definite upswing for a few years.

Still, Downtown Columbus was mostly empty when Brett was laid off from his graphic design job. Like countless people before him, his response to this upheaval was to steer into it and do something completely different with his life. So in 2010, he started Spoonful Records, taking the name from a record label he ran as a hobby. When it opened, Spoonful was between a faith mission and a YMCA. Now its prominent neighbors include a bike shop and a massive barcade.

When I first heard about Zak and Jessica’s Spoonful wedding, I thought about how unique it sounded—who gets married in a store? But the more I thought about it, the clearer it became.

Brett chose downtown for Spoonful for a variety of reasons: it was cheaper, it was a neighborhood he already knew, and it was away from the other stores in the city. There’s a handful of stores in Columbus, each one spaced far enough away from one another that it feels decidedly territorial, but to Brett, the local vinyl scene isn’t filled with competition but rather collaboration. When someone comes in looking for a record that’s sold out, he’s just as likely to check with the other stores in the area as he is to offer to place an order for it. That’s in part because he feels that Spoonful’s prominence is a credit to the record culture in the city and he wants that environment to thrive just as much as he wants his own store succeed, and also because he’s just as much a collector as he is a store owner. He knows what it is like to have your heart set on a new release, and he works to avoid that disappointment.

They do a lot for you at Spoonful. There’s no feeling of gatekeeping and no superiority complexes readily on display. Brett and Amy are unflinchingly accommodating, going from showing first-time buyers the intricacies of vinyl to opening their lives to the regulars who stopped being regulars and instead just became friends. When I first heard about Zak and Jessica’s Spoonful wedding, I thought about how unique it sounded—who gets married in a store? But the more I thought about it, the clearer it became. There are places that are fundamentally important to our identities, that serve as second homes that fit just like skin, so of course someone would want to start a chapter of their life surrounded by that feeling of comfort.

That comfort is apparent to all who set foot in Spoonful Records, as is the undeniable romanticism that is so intertwined with the mechanics of vinyl. Record stores attract a diverse lot, but they are all united by their passion for collecting. After all, you really have to love music and love this medium to start a collection. But once that love is awoken, it is a short leap to suddenly have it become an obsession. When you step through the doors at Spoonful and the light shines through the shades and dances off the plastic-covered records, it isn’t hard to see why so many have made it their life.

Written by Ian Benson
Posted by Brett at 6:58 AM 2 comments: