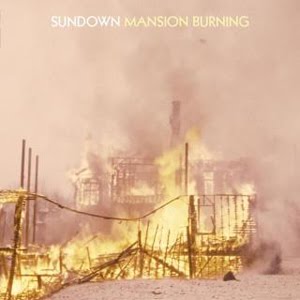 Neil Young once said: “People [used to] close their eyes and listen to music. Today there’s a lot of images to go with music. A lot of music is crap and it’s all commercial and the images are all trying to sell the record.”

If this quote is important it’s because Neil Young and Crazy Horse may be Sundown’s closest musical relatives. And the kind of music Young is harkening back to—the kind you close your eyes to—is exactly the kind of music Sundown is making. Mansion Burning is the kind of record you listen to on wax, through headphones. And the only images associated with the album are the ones your mind invents to go along with the music.

Sundown’s six songs are a slow burn. Mansion Burning is a short album that takes its time and its music seriously. Droning guitars and feedback match up nicely with T.K. Webb’s hang-dog vocals of small towns and hard living.

Sundown’s sound is hard to pin down. Psych. Folk. Rock. They call it “new cosmic American music.” Who are we to argue? Mansion Burning is muscular without being overtly manly. And it’s dreamy without being boring. Difficult feats both.

The standout track is the six-minute “Sleepy Song.” Webb sings about wanting change, hoping to see things differently than others around and before him. But for all his trying, he is unable. He sings that he “wears the same shirt my father worked in,” and “wears the same jacket my dead brother fought in.” Everything just ends up the same.

“Sleepy Song” is anything but sleepy. It’s a big song full of reverb and gauzed-over guitars and a mournful harmonica. It’s a song that makes you feel small. Makes you feel trapped in a world writ large. It makes you long for a safe place to curl up and sleep through the trouble.

Listeners who like their music high on the intensity meter and a little dirty might not dig Mansion Burning.  It's a more nuanced and dusty sound.  It's a record that is plugged-in to the Midwest: a little twang in its voice and a little sleep in its eye but knows exactly what it holds dear.

Posted by Spoonful Records at 4:49 PM No comments: